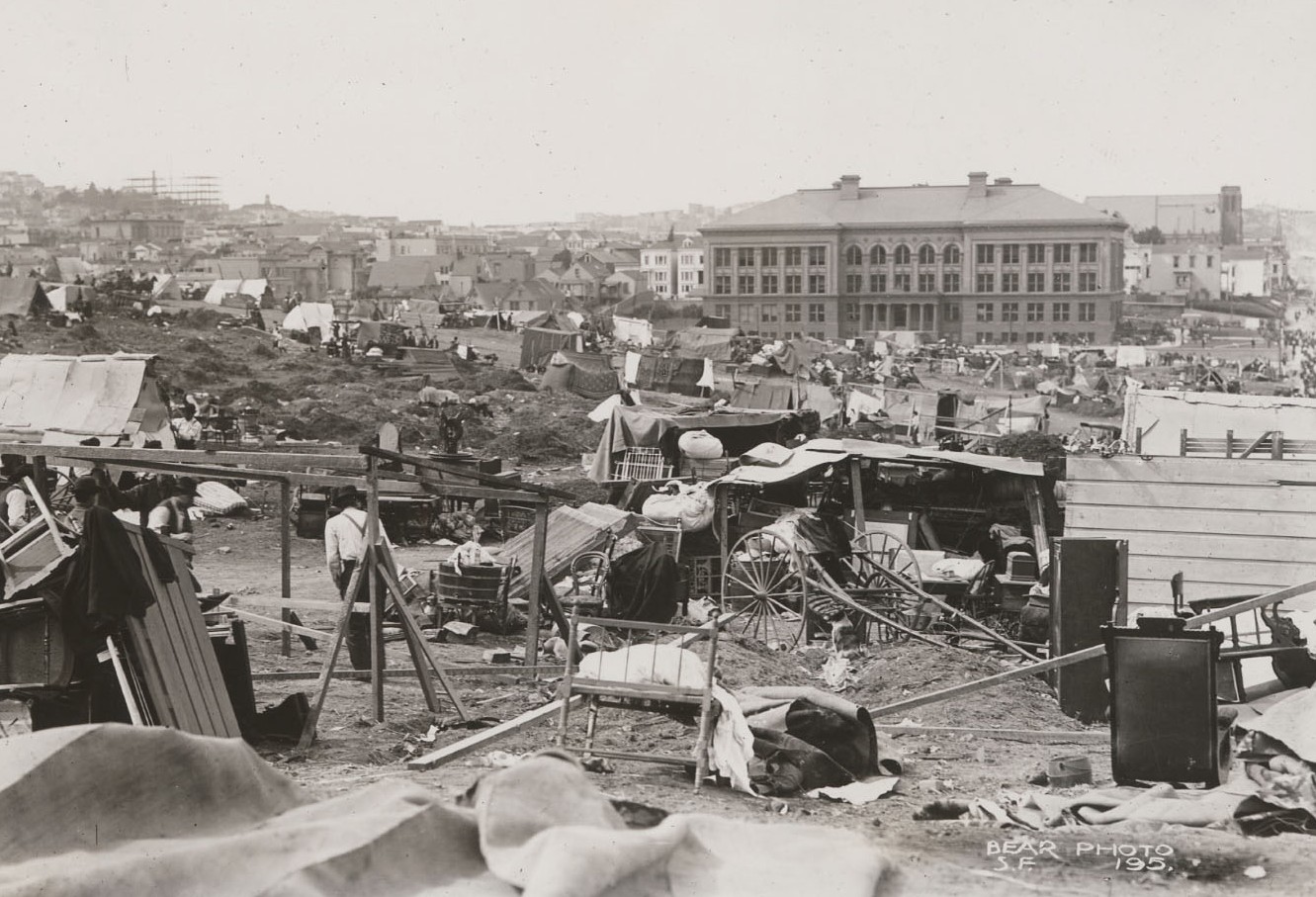 110 years ago today (April 18th 1906), the San Francisco Bay Area shook violently from the magnitude 7.8 rupture of the San Andreas fault. The shaking destroyed many buildings and sparked a fire that would sweep through and burn down most of the city. The earthquake and three days of fires caused an estimated 3,000 fatalities and left half of the city’s 400,000 residents homeless.

This week the earth has reminded us of its often violent temperament. A 6.9Mw earthquake struck rural Myanmar on Wednesday, a 7.0Mw earthquake struck Southern Japan on Friday, and a 7.8Mw earthquake struck Ecuador on Saturday (the earthquake in Ecuador was as powerful as the 1906 earthquake!). These have already caused nearly 400 fatalities and the numbers are still rising. The communities that have been destroyed will take years to fully recover. Hopefully through recovery they will build more resilient communities.

Reflecting on all this earlier today I wandered into the depth of the Bancroft Library’s 1906 San Francisco Earthquake Collection (it is an amazing collection!). I found tons of fascinating photographs, maps, reports, testimonials, poems and more. I’ve shared some images of the collection below, followed by some thoughts on the current risk of San Francisco. Indeed its impossible to look through these pictures without thinking of what would happen if the earthquake were to repeat itself today. How has the risk of San Francisco changed in the past 110 years? How is the risk profile of cities changing in general, and how can we control our risk future? This will be the topic of our session on Building a Less Risky Future: How Today’s Decisions Shape the Disaster Risk in Cities of the Future (co-organized by myself and Stuart Fraser of GFDRR) at this year’s Understanding Risk Forum in Venice happening May 18-20th.

[join the conversation at @UnderstandRisk and #FutureOfDisaster]. Now some amazing pictures from the 1906 earthquake archives:

Seeing some of these familiar streets in the aftermath of the earthquake and fire, I wonder what would happen to the Bay Area if the 1906 earthquake were to repeat itself. We have learned a great deal about earthquakes in the past 110 years and the California building code is one of the most developed when it comes to seismic safety. However, in some ways the Bay Area is more at risk than it was in 1906. Our buildings are by and large more resilient–apart from some remaining unreinforced masonry and soft-story wood-frame buildings (which the city is addressing!). But the Bay Area population has increased ten-fold since 1906, to 7 million residents today. So even if the rate of building damage is much less, the number of people affected will be vastly more. And the urban systems that enable 7 million people to go to work, school and engage in the famously vibrant Bay Area lifestyle are much more complex and interconnected then those of a century past. Much like a chain is only as strong as its weakest link, so too are complex interconnected urban systems often vulnerable to system-level failure due to damage of a single component. Hence the main concern for San Francisco is not the potential large number of fatalities (most estimates predict few casualties, though perhaps not few enough), but rather the ability of San Francisco to maintain its function as a city and recover quickly enough to retain its population, industries and culture. It is in this vain that San Francisco launched for this 110 year anniversary their official resilience plan: Resilient San Francisco – Stronger Today, Stronger Tomorrow. In fact, San Francisco has done a lot of work to build its resilience to earthquakes, in large part through the Community Action Plan for Seismic Safety (CAPSS), as well as large infrastructure programs to address key vulnerabilities (the new bay bridge, upgrades to the water distribution network, bridges, etc).

There is no doubt however that the earthquake risk to the Bay Area is much more than what is commonly believed. While long-term residents often claim veteran status having experienced the 1989 Loma Prieta earthquake, we should all remember that the Loma Prieta earthquake was a relatively small earthquake centered in Santa Cruz. It nonetheless destroyed many buildings in the Marina district of San Francisco, damaged highways, and damaged and temporarily closed the Bay Bridge. But a large rupture of the San Andreas or Hayward fault would be incomparably worse!

So now that San Francisco has developed a resilience plan, let’s hope that it won’t be long till the plan is implemented! The alternative is grim, as is depicted by this artist who has merged pictures from the 1906 earthquake with scenes of today.

I’m passionate about my work and therefore enjoy sharing it with others. So I wanted to explore how I could […]

On the “Top 10 Riskiest Cities” and Getting Mauled by Bears

This post was originally published by David Lallemant on ResilientUrbanism.org in April 2014. The original post can be found here. In […]